Learning and memorizing multiplication facts has been an ongoing struggle or perhaps a topic of boredom for my oldest. He would rather do fractions and decimals or measurements and graphs- Ahh, all of these are much more “visual” concepts… Now I’m starting to see why this topic was a broken record!

In researching yet another way to get him to memorize and get these down pat in a flash, I discovered:

A visual and structural approach to multiplication for Right Brained learners! I watched a couple of his videos and thought, WOW! this is so awseome. I signed up for the 3 free worksheets and had him watch the videos and do the sheets along with the video. He looked over at me half way through the video wide-eyed and said- this guy is a genius!

This is what one of the worksheets looks like, but if you’re at all interested watch the video to see the patterns of 3,6,9 times and the 7’s. It’s a simple tic, tac, toe pattern that incorporates all three tables. 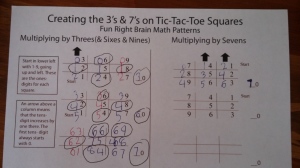 We’ll be purchasing the workbook, it’s not expensive at all! Pattern Play Math-…… You’re playing our song!

Speaking of Songs; Bird Biology was the other highlight of our day! We headed over to The CornellLab of Orinthology to learn all about Birdsong! This was an interactive lesson with 7 steps.

What is a Songbird?

Their reperetoires include songs and calls

They sing at dawn

Some sing two notes at once

Birds sing to defend and impress

After reading through these facts and hearing the Songbirds, we then played Songbirds in action and trained for Bird Song Hero!

Listen and match the visual

Then before heading outside we did a little watercolor fun art with singing birds! 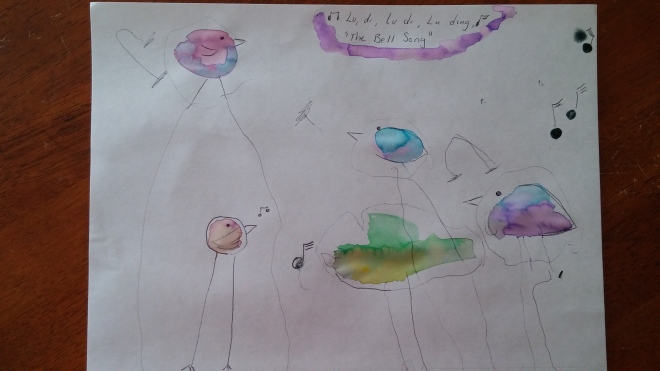