Even though the boys were feeling under the weather today we were very productive! Luke fell asleep while eating a snack yesterday at 4ish on the couch and slept until 4:30 this morning- glad he was able to get some much needed rest and it allowed for us to do lots of activities this morning!

We started the morning off with a Sink or Float science activity.  I gathered lots of materials and filled a plastic storage box with water. Luke had his clipboard with all the items listed and circled S or F as he put each item in the water. I also wrote down his prediction on the chart.  He guessed most correctly and searched the house for more items. He also started coming up with his own questions…. He noted the bowl was floating, then told me ” put the apple in the bowl and see if it sinks, I think it will!”   We had a great dialogue going and kept adding different scenarios- full bottle of water vs. empty bottle, etc.

Then he moved on to some art! I think the simpler the materials the more the imagination! I handed him a large piece of tissue paper, cotton balls, Q-tips and some paint.  He narrated a whole story as he created and added colors…. Art with his own personal purpose! Beautiful art! 🙂 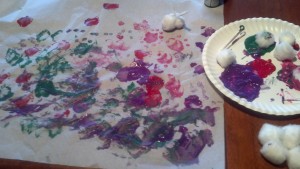 Luke then went on the math website- math is fun and did a few games.

As he went on to play with Legos and have a snack, Liam and I did some daily lessons on Easy Peasy.

He is just finishing up the history on WW1 and coincidentally, today we read about the significance of the poppy flower and Remembrance day, as yesterday was Veterans Day and poppies were being sold here in many places.  We read the poem “Flanders Field” , viewed photos of the field itself, and then he drew his own poppy flower. I love it! He drew the flower first, then with his own artistic touch, drew muscle shaped petals to represent the strength of the poppy flower. 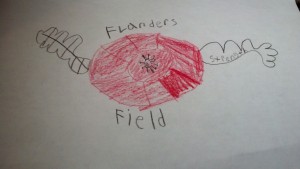 He went on to practice some multiplication problems and some spelling work on his own, then we came back together for some Zoology on Easy Peasy.

He’s in the middle of learning about birds.  Last week he studied and drew the different parts of the feather, this week he is observing the beaks.  After viewing videos of each type of beak on the Cornell Lab of Ornithology website, he drew each beak and food in his notebook.

I would say, once again, we learn so much from observing nature! Today’s big lesson was STRENGTH! Keep trying, shine through, never give up.  Water: a strong element, birds possess strength to survive/adapt.  The poppies persistent, strong- pushed through amidst the tragedy!

One thought on “Lessons from Nature- Strength”