Trains! Trains! Trains! is pretty much all we hear lately at our house! Heading down into the basement this morning I went to search in my pile of recyclables for some sort of hand on math game I could make from odds and ends I’ve kept.  I found a great box for a base and then had the idea of making some sort of abacus for him using pipe cleaners and cereal or beads etc.  I began to make it using construction paper to cover the existing image, covered it entirely with contact paper and then used a push pin to make the initial hole where the pipe cleaners could be inserted.  I called my two year old over to check it out and he immediately started stringing the beads on to the pipe cleaners.

At first I was just going to use it for counting and for fine motor skills, patterns and such, but then I had another idea of adding trains to it! I drew trains next to each pipe cleaner and added a certain number of train cars for him to match the number of beads to.  I also thought at the same time it could easily be changed to color patterns, addition/subtraction etc. by use of the cars attached to it!

We had an exciting interruption during this activity as next door the garbage truck arrived! He yells out to me  “get my book mom!”  Following his train of thought, I knew he meant his truck book 😉 and grabbed it from the shelf for him. He kept yelling “hurry, hurry!” He ran over to the window and opened his book to the page with the garbage truck on it and said “yup, see mom!” I said “Do they match?” he shouts “whoo hoo!” So I’m guessing that was a yes! I love that he thought to “research” and looked in his book!! 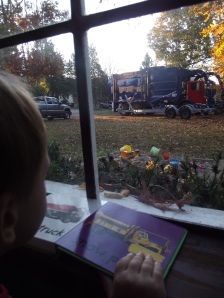 One thought on “Counting and Reading Preschool Style”