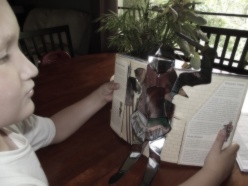 It’s Monday! First on the “to do” list was to get to the library to pick up our books that had arrived. Errands and learning done hand in hand, as we had many things to get done today!

Listening Skills: On the trip over we listened to the audio story “Kenny and the Dragon” by Tony DiTerlizzi.  Both of the boys seemed to enjoy it as they giggled at some of the humor in the story. Luke who is 2yrs old,  mostly repeated words that stuck out to him and Liam made several comments as the story continued on.  Quick trip over, so we’ll have to continue that one on our next car ride. Great way to use the imagination and create mental imagery! Not to mention a positive way to keep occupied as we do errands or travel around!

Science: We returned home and watched a DVD from the library “All About Amphibians” as we ate lunch.  Both boys again loved it! We are focusing on bodies of water this year and right now it’s rivers, lakes, ponds etc. so this fit right in. They yelled out with excitement at the different frogs, toads, fish etc that were shown. Luke repeated many words and cracked up at some of the cartoon imagery in between the segments! He just woke up from his nap as I was writing this and asked to watch it again! Liam knew a lot of the information already but did learn a few new things as well.  I tested him by asking a few definitions to some vocabulary words we heard as well as asking him to verbalize the similarities and differences we heard about fish, reptiles and amphibians.

Math: We started  “Life of Fred” math today. This is an alternative type of math learning, not the typical work/text books you see. These tend to be told in story form and then give a “your turn” section at the end of each short story. I figured we’d do one each Monday as something different for math learning.  Today’s chapter was about pets and Liam learned the meaning of Cardinal and Ordinal numbers when answering the “your turn to play” section as well as a little intro to algebra by figuring out what value X and Y had, to make the statement true. He was a little confused, but said he understood after several explanations?!

Writing:This year I am using the workbook “English for the Thoughtful Child 2″ and today’s lesson happened to be a writing exercise. He was asked to write in his own words the featured story….well, he hates to write so two sentences down was all I got, however he knows it’s expected to be spelled correctly and written as neat as can be, both of which he did. Next, we did copywork from the poem ” The Arrow and the Song” by Henry Wadsworth Longfellow.  Again only a few sentences done with his best effort each day until it’s completed. I chose this one because he’s into archery, we are studying the Middle Ages and figured by putting the two together he would enjoy it! He likes copywork, so no complaints on this one :).

Geography: Alaska is our state this week. I pulled out our big wall map as we located the state,  the capitol and the highest mountain, Mount McKinley! The size and the thought of the long days or nights gave him lots of fuel for questions and making comparisons between the states.

This weeks Read Aloud: We are continuing to read “Wonder Struck” we are about half way through now and hope to finish this week, as we’re both anxious to see how these two lives are going to connect! We read aloud each day for about 15-20 minutes, followed by some narration. -link to narration ideas and the method.

Spanish: Today’s lesson was to read and circle the Spanish number corresponding to the shown number of objects. This was done is a couple of minutes, so I think we’re ready to move on to some basic words next week.

World History: The book “Castle”- Medieval Days and Knights” by Kyle Olmon was last on the list today. Liam found this book at the library this morning so a last minute change in history plans for today, but I have to say it was a great find! It’s a pop up book with facts about life in the Castle. His favorite page contained a small catapult in which to put a small rolled up piece of paper and launch it! I stacked up some dice we had handy as a target and he like that! 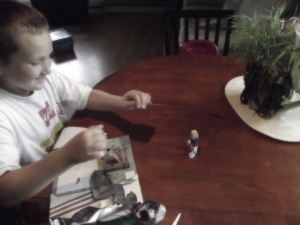 2 thoughts on “It’s Monday and more!”